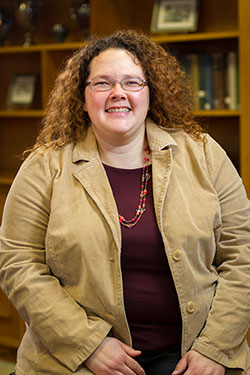 Amy grew up on a dairy farm and has been a lifelong resident of the North Country. She has a Bachelor’s degree in English from the State University of New York at Plattsburgh. She graduated from Clarion University of Pennsylvania with a Masters of Library Science. Her graduate work focused on the digital divide in rural and small communities. She manages the FitzPatrick Library at Miner Institute and also oversees the vast archives of Heart’s Delight Farm and Miner Institute. Amy has been at Miner Institute since 2006. 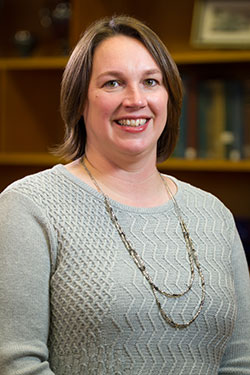 Heather grew up on a dairy farm in western NY where she developed a passion for dairy and an appreciation for research. She has a Bachelor’s of Science degree in animal science from Cornell University, a Master’s of Science from Pennsylvania State University and a Ph.D. from the University of Illinois. She has been working at Miner Institute since 2004. Her research at Miner focuses on dairy cow nutrition and management. In particular, she has investigated different types of diets for transition cows to help control feed costs and minimize environmental concerns while promoting animal health and productivity. She has also examined management factors important for animal welfare, including stocking density and maternity pen design and management. . In addition to research activities, she is active in training and mentoring undergraduate and post-graduate students through a variety of experiential learning programs at Miner Institute. 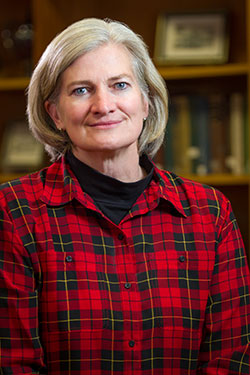 Katie grew up in the Finger Lakes region of New York. She has a Bachelor of Science degree in Animal Science with Honors in Undergraduate Research from the University of Vermont. She received a graduate fellowship from Miner Institute and received her Master’s of Science degree in Animal Science from the University of Vermont. She investigated techniques for in-vitro maturation and fertilization of bovine oocytes. She has been working at Miner Institute since 1987, first as Equine Program Coordinator, and was named Director of Research in 1993. The research program at Miner Institute focuses mainly on agronomy, ruminant nutrition and nutrient cycling. Katie’s main area of interest is reproductive physiology; she has been involved in work with dairy cattle and improving systems for the storage of stallion semen. Katie lives with her family on a bicentennial dairy farm in Georgia, Vermont. 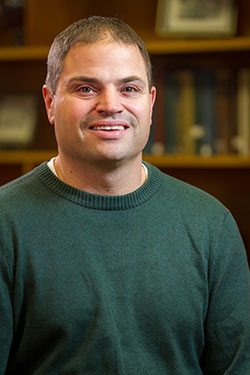 Kirk grew up in the North Country and received a Bachelor of Arts degree in Economics, with an emphasis in Finance and Investments from Binghamton University. He obtained his Series 7 brokerage, life insurance, and annuity licenses while employed first as a stockbroker and then as a financial service representative for Charter One Bank. Kirk has been employed at Miner Institute since 2000, when he was hired as the Finance and Personnel Officer. He was promoted to Vice President of Administration & Finance in 2011. His responsibilities include the accounting and financial management of Miner Institute’s operations, the administration of its fringe benefit and retirement plans and oversight of information technology. In addition, he is the Finance Officer for The William H. Miner Foundation, a Trustee/Treasurer for the Alice T. Miner Colonial Collection Museum and serves on the Board of Directors of Cornell Cooperative Extension of Clinton County. 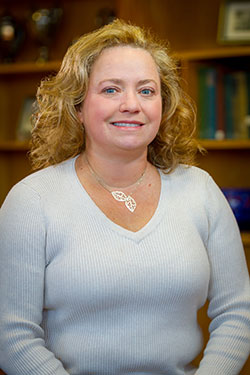 Karen grew up in Chelmsford, MA. She earned a Bachelor of Science degree in Animal Science, Equine Option at the University of New Hampshire. She has been at Miner Institute since 1991. As Equine Manager, Karen is responsible for the care of Miner Institute’s Morgan Horse herd as well as the equine education programs. Several foals are born each year into the program, allowing for a constant supply of horses in training for one of the many disciplines including English, Western, and driving. Karen’s training philosophy is one that blends “natural horsemanship” and traditional training skills to produce a finished horse that is happy in its work. A similar multi-faceted approach is used to prepare students for a career in the equine industry and to teach horse owners how to better understand and care for their horses. Karen is a Regional Vice President for the New York State Horse Council and a past president of the Champlain Valley Morgan Horse Association. 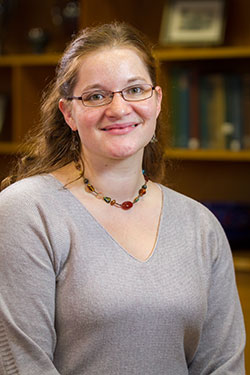 Rachel is a North Country native with a Bachelor of Arts degree in journalism from the University of Alaska Fairbanks. She spent a few years in Albany County, NY working as a newspaper reporter and copy editor before returning to the North Country. She has been at Miner Institute since 2009. As Public Relations and Marketing Coordinator, Rachel’s responsibilities include promoting and marketing the Institute’s programs and events; maintaining Miner Institute’s website and blog; managing social media accounts; media relations; community outreach; and distribution of the monthly Farm Report and semi-annual Stable Sheet newsletters. Additionally, Rachel serves as a Trustee for The Alice T. Miner Colonial Collection Museum; is on the Board of Directors for Cornell Cooperative Extension of Clinton County; and the Community Advisory Board for Mountain Lake PBS. 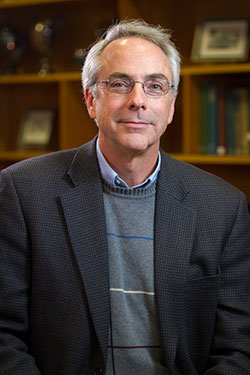 Rick grew up on a dairy farm near Potsdam, NY. He has a Bachelor of Science degree in Animal Science from Cornell University and a Ph.D. in Ruminant Nutrition from Purdue University. Rick spent 13 years at the University of Nebraska, Lincoln as a professor of ruminant nutrition and extension dairy specialist. His areas of interest include forage and non-forage sources of fiber, carbohydrate nutrition, and dairy cattle behavior. He has been president at Miner Institute since 2003. As president, his primary role is to provide leadership to Institute staff as they work toward the common goal of optimizing the crop-animal-environment interface through research and educational programs. In 2010, Rick was awarded the Pioneer Hi-Bred Forage Award recognizing outstanding research and/or educational contributions in the area of forage production, processing, storage, or utilization. He was also awarded the 2015 Nutrition Professionals Inc. Applied Dairy Nutrition Award, recognizing outstanding achievement in research, teaching or extension in applied dairy nutrition. He holds adjunct faculty positions at the University of Vermont, Cornell University and Plattsburgh State University. 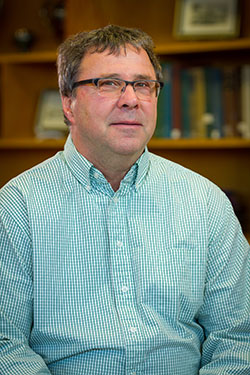 Steve grew up in Vermont and got started in agriculture while in college at the University of Kentucky. He worked on a 3,500-acre farm that produced tobacco, seed corn, soybeans, and small grains in addition to managing 3000 sheep. He spent five years in Wisconsin working as a herdsman on a 200-cow dairy farm before he moved to New York’s North Country in 1986. He worked on several progressive dairy farms in Clinton County, and managed his own herd for two years, before coming to Miner in 2005. Steve’s responsibilities at Miner Institute include managing the Institute’s herd of registered Holstein cows, managing dairy and field crops staff, supervising students, working with the research team, benchmarking Miner Institute dairy performance indicators, and expanding overall herd performance. 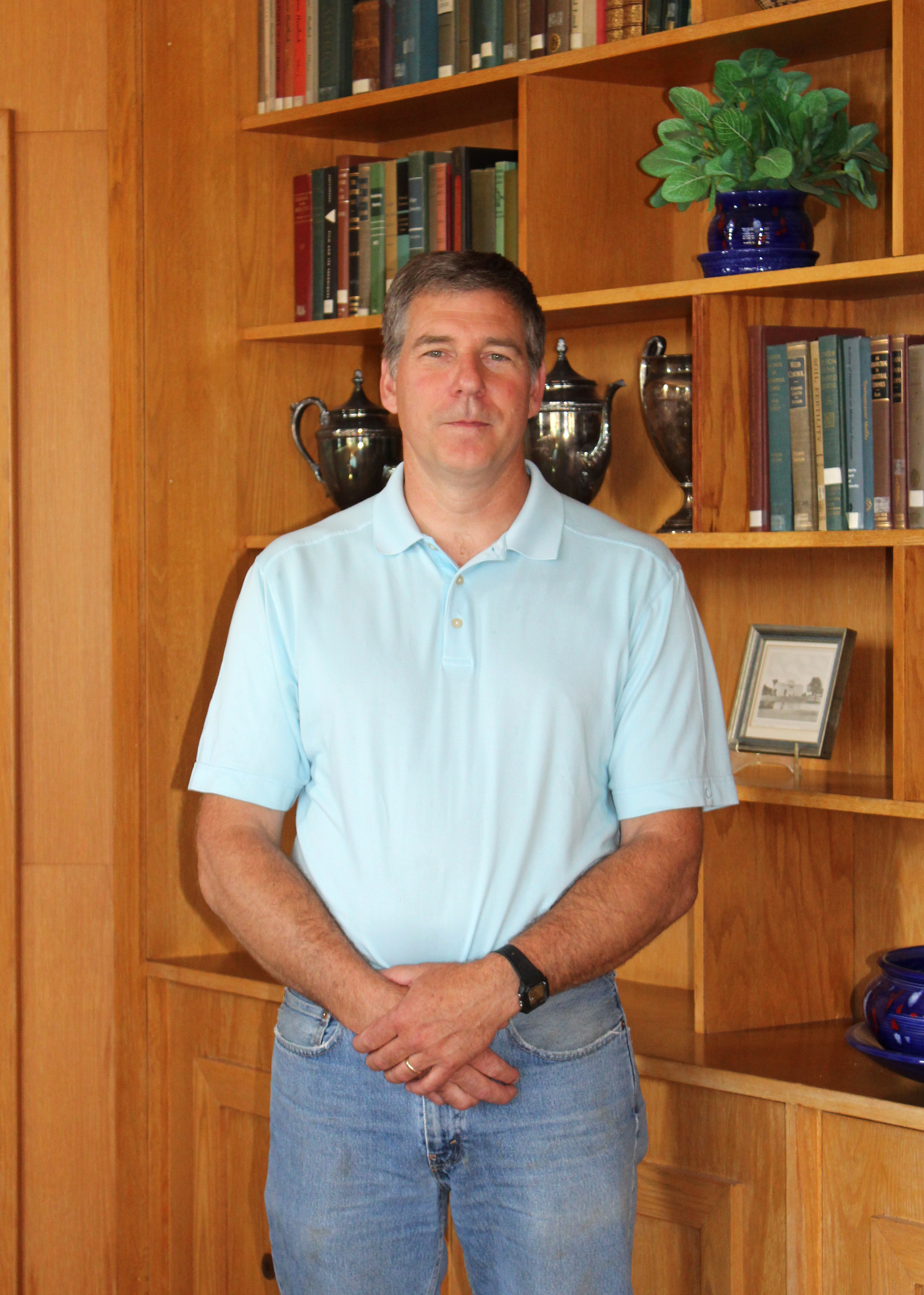 Mike grew up in the small town of Port Henry along Lake Champlain. He attended Clarkson University with an ROTC scholarship where he received a Bachelor of Science degree in mechanical engineering along with being commissioned as a second lieutenant in the United States Army Reserves. He began his career at International Paper's Ticonderoga Mill as a project engineer. Within 2 years, he was promoted to maintenance team leader of the woodyard, pulp mill, and recaust maintenance departments consisting of approximately 30 union employees. After 3 years, Mike and his recently-retired future father-in-law went into business together when they bought a small wood products manufacturing plant. After a couple years, they built a new production plant in a nearby town. In 2010 Mike and his wife Colleen, now co-owners of the business, secured a USDA grant to help them build a wood pelleting plant. Mike designed, helped construct, and operated this new facility until selling the business in 2015. Mike continued to work for the new owner until 2018 helping with the transition. Mike started at Miner in 2019 and brought with him 25 years of production-based manufacturing, maintenance and construction experience. 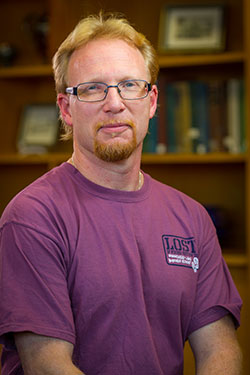 Steve moved to the North Country from Buffalo in June 1994 to begin work as the Director of Lab Studies at Miner Institute. He received his Honors B.S. in Biology from the University of Western Ontario and his M.S. in Environmental Engineering from SUNY Buffalo. His areas of activity include education, lab and field based monitoring, and research into nutrient management on farms. He works closely with SUNY Plattsburgh’s Applied Environmental Science program every fall teaching Agriculture and the Environment, as well as assisting other courses and independent study projects. He works on lab procedures and efforts to standardize forage, soil and water testing. He has developed STEM related workshops on water and chemistry as part of our High School Chemistry Program with Chazy Central Rural School and Peru High School. He is a member of the New York State citizens advisory committee to Lake Champlain. The overall focus of his efforts is to promote understanding of the interface between environment and agriculture through research and education 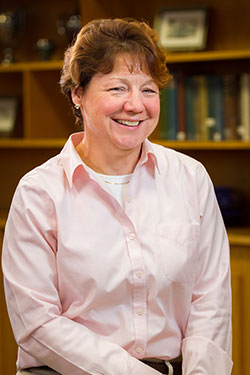 Wanda is responsible for the coordination of educational programs for students, farmers, and agribusiness organizations through events such as Dairy Day, Crop Congress, Farm Days for Fifth Graders, farm tours, and other educational programs and agribusiness training sessions. She is responsible for overall leadership of the 14-week college student internship program, Summer Experience in Farm Management, and coordinates the spring semester Dairy Scholar Program. She earned both her B.S. in Animal Science and M.Ext.Ed. from the University of Vermont. In addition to receiving the Good Neighbor Award from the New England Jersey Breeders Association and Vermont Jersey Breeders Association, she is also on the Board of Directors for Vermont. Wanda serves on the Program Committee for the Northeast Regional Dairy Challenge and is on the Board of Directors for the North American Intercollegiate Dairy Challenge, currently serving as Program Chair. She is also the Cattle Superintendent for the Clinton County Fair and the Champlain Valley Exposition and on the organizing committee for the Vermont Dairy Producers Association. 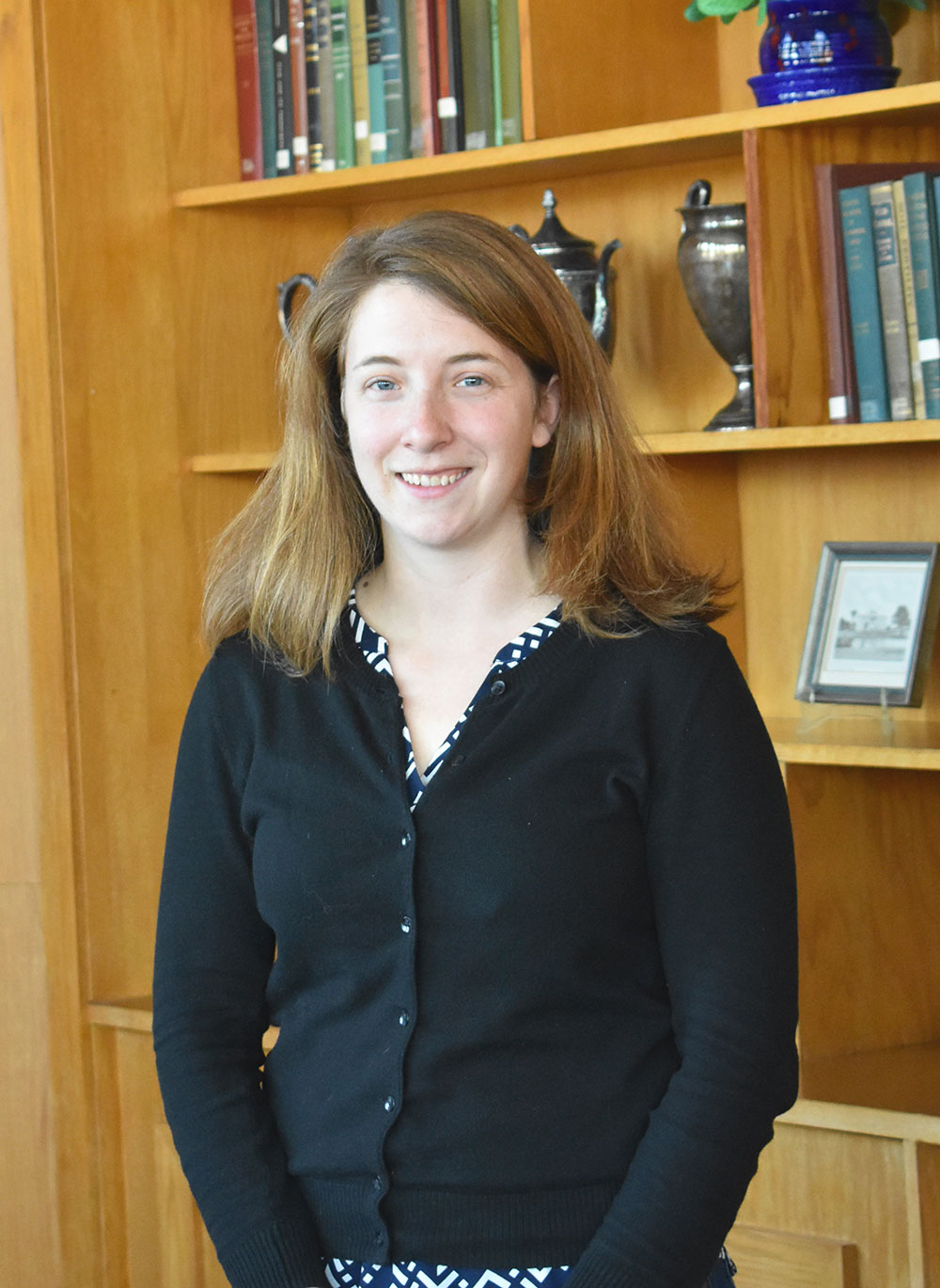 Sarah grew up on her family’s dairy farm in Addison Country, Vermont. She has a Bachelor’s of Science degree in Animal Science from the University of Vermont, a Master’s of Science, and a Ph.D. from the University of Illinois. She has worked at Miner Institute since 2018. Her research at Miner focuses on dairy cattle nutrition and management. Specifically, Sarah enjoys researching dairy calf and heifer nutrition and management. She is also involved in mentoring and teaching undergraduate and graduate students through different learning programs offered at Miner Institute. 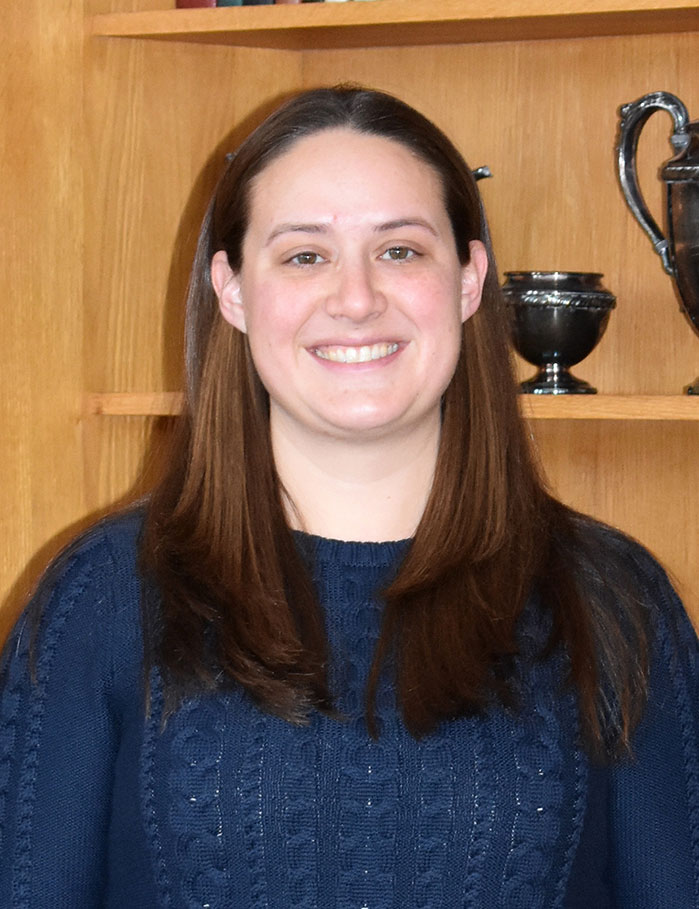 Laura grew up in the foothills of the Adirondacks and that experience instilled in her a deep appreciation for the outdoors and our natural resources. This passion for the environment led her to SUNY Plattsburgh where she earned a Bachelor of Science degree in Ecology. After graduating from SUNY Plattsburgh, she began working at Miner Institute as a research technician on projects investigating the environmental impacts of dairy farming and dairy cow nutrition and welfare. This work instilled a passion both for the research process and enhancing the environmental and economic sustainability of agriculture in the northeast. With a graduate fellowship from Miner Institute, she received her Master’s degree in soil science from the University of Vermont. Laura’s main research focus is nutrient management on dairy farms; specifically investigating how different management practices influence field hydrology, erosion and the export of nutrients to surface waters. 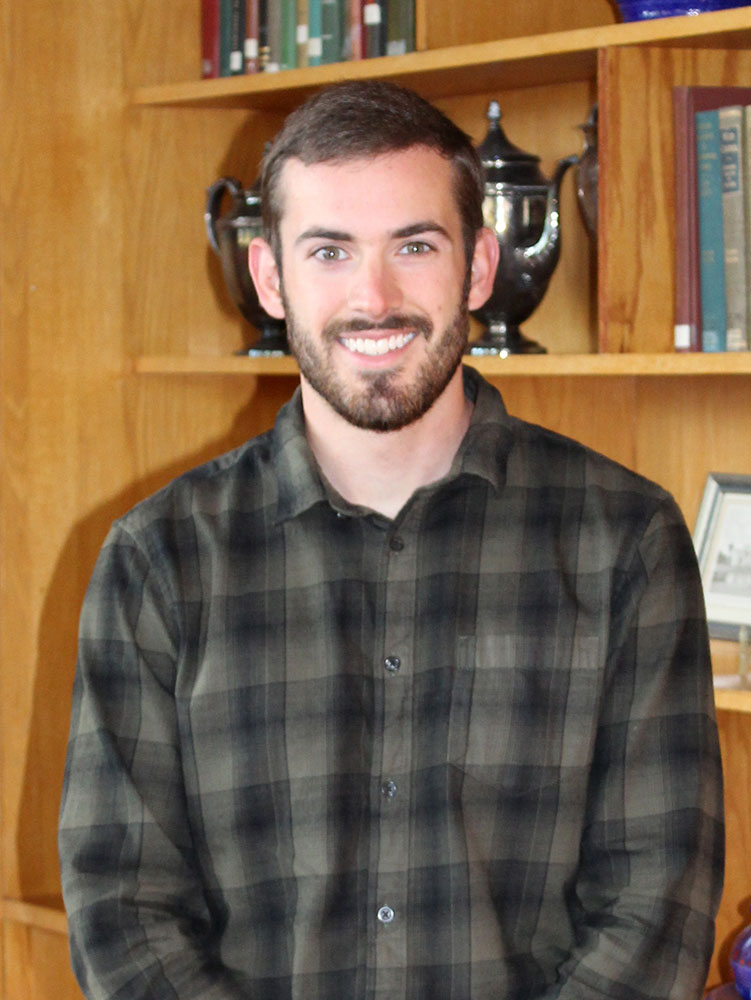 Allen grew up in the Champlain Islands of northern Vermont and has been engaged in crop production since high school. He received an Associate’s degree in Agribusiness Management from Vermont Technical College and went on to earn Bachelor’s and Master’s of Science degrees through the University of Vermont Plant and Soil Science Department. Although he specialized in forage agronomy, Allen attended the Advanced Dairy Management Program during his enrollment at the University of Vermont through the FARMS 2+2 Program. His research interests are diverse and include forage crop fermentation, storage, and utilization as well as traditional agronomic interests.