The Story of William H. Miner

This 90-minute documentary chronicles the life and legacy of one the most notable North Country figures. William Miner was an orphan, an inventor, an entrepreneur, a farmer, a millionaire, and the greatest philanthropist the North Country has ever known. William Miner’s ambitious pursuits included the development of Heart’s Delight Farm, which had 300 buildings and employed 800 workers on 15,000 acres. He founded a railroad appliance company that is still in operation today in Chicago. He built the Chazy Central Rural School, the first centralized school district in NY State, and the Physicians Hospital. More than 85 years after his death, the North Country still benefits from his generosity. 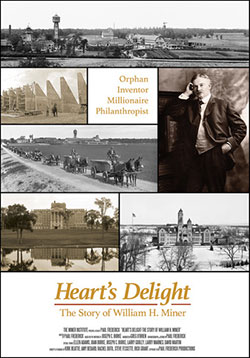 The MAN and the MYTH

The life of William Miner demonstrated that success in America could still depend, not on "who you were, but on what you could do." After he was orphaned at 10, William Miner was raised on a humble homestead near Chazy, NY. On the farm he learned the value of hard work. When he was 18, he traveled west, where he eventually made his fortune by building a leading railroad appliance business in Chicago. He returned to Chazy in the early 1900s and transformed the old homestead into a 15,000-acre model farm and built a famous rural school, a state-of-the-art hospital and hydro-electric dams to bring the magic of electricity to the area. His foundation still funds the school, the hospital, and the agricultural research institute. After his death, time and tales have layered the man with legends. Burke's biography liberates the man from the myth and concludes that the man, more than the myth, proved truly larger than life.

The Legacy of William H. Miner